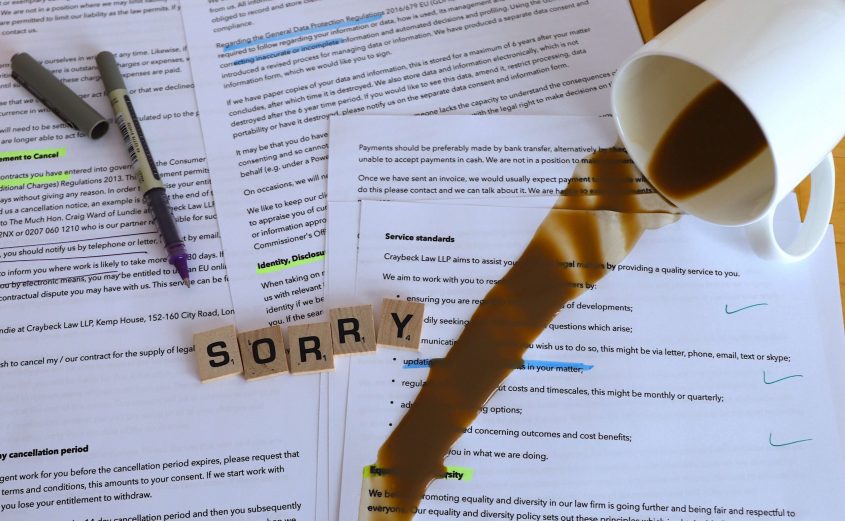 Professionals and organisations are required to work with reasonable skill, care and diligence on behalf of the people who engage them or they care for. If the work of professionals, local authorities, the NHS or other similar bodies falls below the expected standard of reasonable care or service then negligence might have arisen.

Making a claim against someone or an organisation necessitates obtaining sufficient evidence to demonstrate that the person or organisation was either at fault, acted inappropriately, did or did not do something which they were required to do (breach of contract), gave an impression about something which was incorrect or breached a statutory duty.

A negligence claim may arise if the following apply:

What duty of care was owed

A breach of a duty means that in law there existed a Parliamentary Act, statutory instrument, rule, principle or similar which stated how the defendant should treat or behave towards the plaintiff. The defendant knew about this and knew they owed a duty of care and they behaved in a way which breached this duty of care.

Causation (proof of loss as a result of breach of duty)

This is the ‘but for’ test. ‘But for’ the defendants intervention or non-intervention then no harm, injury or damage would have arisen. There can also be partial intervention / non-intervention. This is where the actions or non-actions of the defendant were a contributory factor to a breach but they were not only responsible for this, another person or party was also involved in what happened / did not happen. This also needs to be a sufficient connection between the act or non-act of the person or body and the negligence committed against the plaintiff.

Res Ipsa Loquitur (the facts speak for themselves)

Looking at what happened to the plaintiff, what happened in the ordinary view of things, itself shows that a negligence arose. Such situations of claiming that Res Ipsa Loquitur arose are often challenged by expert evidence showing that another person in that circumstance would also have behaved in a similar way. A defence to Res Ipsa Loquitur is that there is a plausible explanation for what happened. A further defence is that the defendant exercised, on the balance of probabilities, reasonable proper care. Also that the outcome was not anticipated or was a rare occurrence.

Claims can be made for both financial (pecuniary loss) and non-pecuniary injuries for example emotional distress. Emotional distress would usually be claimed along side other forms as loss.

A defence to a claim of injury can arise if the injured person lacks mental capacity. It may be claimed as they do not understand what is happening around them, do they understand that they have been injured. To challenge this it would be a matter of showing that there was distress or a physical injury committed by the defendant which the plaintiff was aware of.

In the given circumstances of an event, would the reasonable person have acted or behaved as the defendant did. This is quite a complex test in deciding if the plaintiff is entitled to damages.

Once a breach of the duty is established in law to have arisen. Once established damages may be claimed.